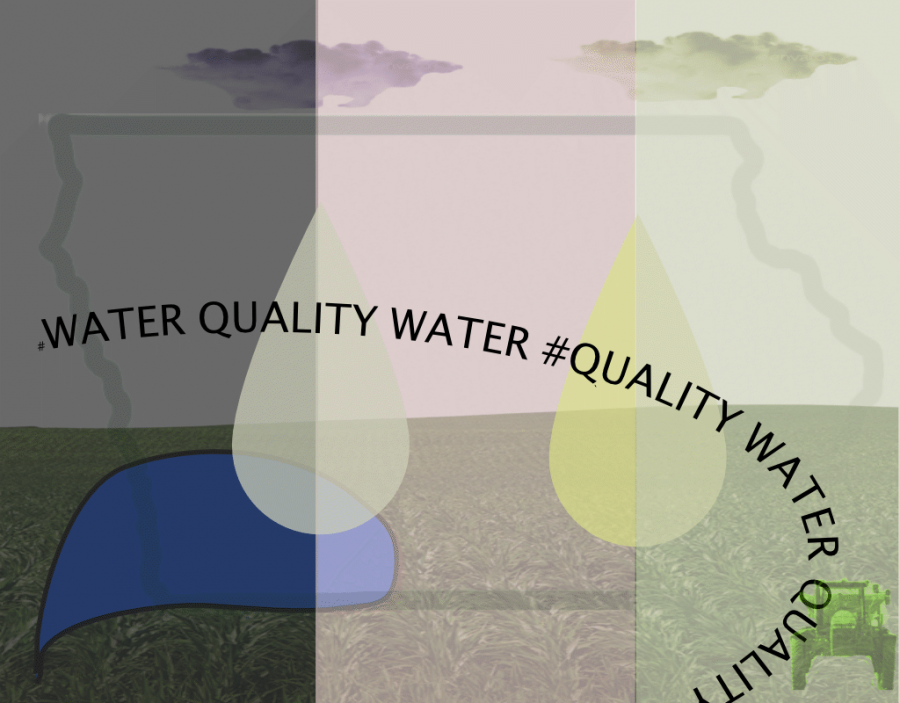 Iowa is known to the world as an agricultural state. Endless acres of corn make up the state’s identity, but the process used to raise that corn is hurting the people and wildlife of Iowa. The fertilizers applied to millions of acres of farmland contain nitrate, a potentially dangerous chemical compound to humans and marine life alike. Nitrate has proven invaluable to Iowa’s agricultural sector, however negative consequences can’t be ignored. To ensure a bright and sustainable future, Iowa will require a plan to stop the state’s ever expanding nitrate output, before irreparable damage is done.

The root of Iowa’s nitrate problem is in the water cycle. When farmers spread fertilizer or manure onto their fields, especially before planting, rain can fall and displace them. Iowa applies the most commercial fertilizer of any state, around one billion pounds of nitrogen annually, especially for the production of corn, so every rainfall can bring about thousands of pounds worth of contamination. This rainfall carries nitrate that has been placed into the soil away to streams and rivers, where it is then able to circulate all over the state and beyond.

Nitrates refer to ionic compounds consisting of one nitrogen atom bonded with three oxygen atoms. They’re commonly found in foods, like leafy greens and cured meats. While it is true that humans regularly consume this seemingly harmless compound, the problem arises when too much nitrate is present in drinking water.

The Environmental Protection Agency, or EPA, has set a limit of 10 milligrams nitrate per liter of water in order to be safe for human consumption. This limit is regularly surpassed in Iowa waterways, sometimes reaching as high as 25 milligrams per liter, however, numbers fluctuate depending on the time of year. In the Des Moines area, nitrate levels are so high that the largest nitrate removal plant in the entire world was opened in 1992. The process of removing nitrate works by creating an ion exchange process, on a massive scale, to reduce the nitrate levels in the water to zero. The completely purified water is then mixed back in with nitrate contaminated water until it is at a level of around 10 milligrams per liter. This facility costs around $7,000 everyday to manage, and the money to cover operation costs isn’t coming from the farmers who contribute to the problem.

Without the operation of nitrate removal facilities, like in Des Moines, serious health consequences can occur. When consumed in large amounts, nitrates can cause the body to become deprived of oxygen by interfering with the hemoglobin found in blood. This effect is especially dangerous for infants and babies still in-utero. In the developmental stages, it is even more difficult for the body to overcome nitrate poisoning and “blue baby syndrome” can develop if contaminated water is consumed. Additionally, continued consumption of water high in nitrates has been linked to increased risks of thyroid, bladder, and ovarian cancers in women by Peter Weyer, doctor of Preventive Medicine and Environmental Health at the University of Iowa. In areas where people get water from unregulated sources, like private wells, the danger is higher than in urban settings with removal systems.

In March of 2015, Des Moines Water Works, the water utility responsible for the Des Moines area, opted to sue three Northeastern Iowa counties: Calhoun, Sac, and Buena Vista. They filed the lawsuit because they felt it shouldn’t be the full responsibility of the utility company to fix the nitrate problem, while agricultural groups, like the Iowa Farm Bureau, stood in opposition of the lawsuit. “That’s the crux of the big debate in Iowa right now,” said Larry Weber, Professor of civil and environmental engineering at the University of Iowa, “does the polluter pay, the farmer, or does the community pay?” Ultimately, the lawsuit was dismissed by a federal district court, still, it started a statewide conversation about poor water quality and its effects on people and the environment.

In addition to the potential negative health effects and all the money poured into removal, there are serious consequences on the environment, both locally and beyond. The current method being implemented in Des Moines, and other areas, is to treat only the water that humans will come into contact with. “The counter to [only treating water for human consumption] is that you’re only then just fixing one stream of the problem,” said Weber, “you’re not fixing the issues related to ecosystem, related to the Gulf of Mexico, related to every small body of water between here and the Gulf.”  The current solution alienates the importance of keeping the environment protected.

Oxygen deprivation, caused by high nitrate concentrations, is an overwhelming challenge that ecosystems face. High nitrate levels allow algae to bloom at a much higher rate than they usually would. This increased presence of algae consumes large amounts of oxygen from the water, oxygen that would usually support marine life. The result is so called “dead zones.” These regions of hypoxia, or abnormally low oxygen levels, can span 5,000 to 15,000 square kilometers. In this vast area, no marine life is present because the water doesn’t contain the oxygen needed to support it. While this effect is seen mostly in the Gulf of Mexico, other large bodies of water can be affected as well. The misuse of fertilizer and manure in Iowa leads to entire areas of the Atlantic Ocean becoming completely uninhabitable by plants and animals. 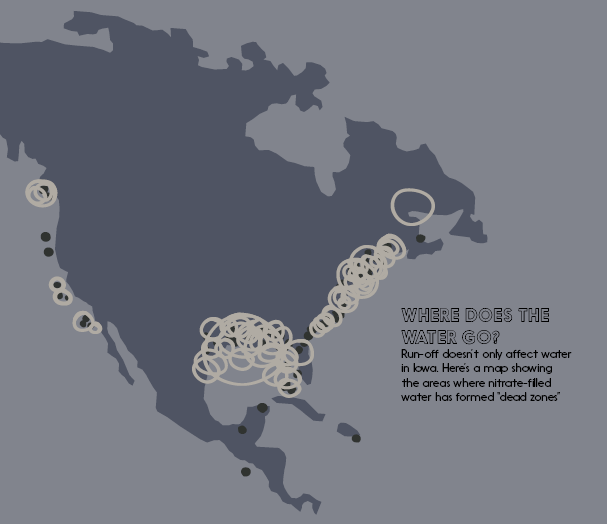 Although massive amounts of damage in the environment have been traced back to nitrate contamination by organizations in Iowa and beyond, there is still debate surrounding application of fertilizer to fields. According to Weber’s estimates, for every acre of Iowa farmland, around 100 pounds of excess nitrogen fertilizer is used. These numbers would indicate a huge overapplication of nitrates, but Jerry Anderson, Regional Manager of the Johnson County branch of the Iowa Farm Bureau, insists that it would be fiscally impossible for farmers to overapply fertilizer. “We’re only going to put in what the crop removes, because we can’t afford to spend [extra],” Anderson said. Although it seems counterintuitive, it is common practice to overapply fertilizers according to Weber. By using more nitrate than necessary, farmers avoid the risk of their fields being under fertilized, which would be far more detrimental than spending slightly more on the initial cost of fertilizer. The cost of fertilizer is so low, about 30 cents a pound, in comparison to the value of a bushel of corn, around six dollars, that the balance between the cost and the benefit leans heavily toward spending extra of fertilizer. For Weber, the most likely solution to the nitrate problem is to reduce the excess nitrate that is often used, “The economy is that fertilizer is too cheap, so it either needs to be regulated or it needs to be more expensive,” said Weber. By increasing the price of fertilizers or regulating exactly how much fertilizer can be applied per acre of land, Iowa could cut its nitrate output.

There is an abundance of evidence, such as research from the Sierra Club, a nationwide environmental organization, on the effects of Iowa’s pollution of the Gulf of Mexico, that points to the negative consequences of nitrate contamination, so what prevents significant action from being taken? The reason can be whittled down to a very simple concept. “Iowa is an agricultural state, by in large, and so our economy is driven by agriculture,” said Weber. The importance of agriculture in Iowa’s economy is massive, so when comparing the potential loss of crop yields to environmental damage and the worries of citizens, farmers often win the debate. It would be detrimental for Iowa to suffer huge losses in the agricultural sector, especially since around 17 percent of Iowans are employed by the field according to Iowa State University, so finding a balance between maintaining profitable farms and minimizing nitrate contamination will be key for the state’s future.

Currently, farmers use many methods to minimize their nitrate output. They use waterways, terraces, and cover crops in order to catch water and soil that has eroded from the field. Waterways are places in the ridge between two downhill slopes and are used to prevent soil and water from traveling into the center of the ridge by placing grass in the center. Terraces are ridges dug into the sides of a downhill in order to create a sloped area in order to catch erosion that go downhill. Cover crops, the newest of these innovations, works by planting grasses with deep roots in areas that may be subject to runoff. The cover crops catch water that is high in nitrate and use it for their own growth instead of introducing it into waterways. Most of these methods are very effective for maintaining soil erosion, however the main problem with nitrate pollution is water runoff, which waterways and terraces do very little to address. The bulk of the progress made to lessen nitrate concentrations has been through cover crop planting, which has increased 1,800 percent in recent years.

While all of these methods have been relatively successful, especially for eliminating phosphorus, another dangerous contaminant, but they’ve failed to make a significant impact on nitrates These methods are unable to solve the nitrate problem because control erosion, but not water flow, which is how nitrates travel. One well intentioned practice, tiling, is even harmful to water quality according to Weber. Tiling works by placing piping through farmland to give water an easy route to follow. The hope is that allowing water to flow more easily will stop sediment erosion, and it is largely successful in this goal, but it also increases the flow of water through the field. This means that more nitrate contaminated water flows out of the field for any given interval of time. By trying to stop erosion, farmers have inadvertently worsened the nitrate problem.

The solutions currently being used have made a minimal impact on the overall problem of nitrate contamination, so it is clear further action needs to be taken. Currently, Iowa is operating with a voluntary solution. This means that farmers can choose whether or not they will personally take action towards reducing their nitrate output. “If you are required to do all of these things, and on the ground that doesn’t need it, or in a watershed that isn’t impaired you’ve just reduced the profitability of all of those operators,” said Anderson. The argument is that forcing farmers who are on level land or in a watershed area that has a small amount of nitrate doesn’t help solve the problem and harms farmers’ livelihood. It would also be difficult to enforce regulation because ever farmer’s land is different from the next. Iowa is currently on the fifth year of this voluntary system, and there has been very little change in nitrate levels, however five years hasn’t been enough time to gather sufficient data. Only time can tell whether or not a voluntary approach is the final solution.

Nitrate pollution is a very daunting problem to solve. There are many angles that need to be brought into consideration when looking at potential solutions. Agriculture is a vital part of Iowa’s economy, so alienating it is clearly not a viable option. The state government can find a way to enforce regulations or entice farmers to voluntarily take action to reduce their own nitrate outputs for immediate action. Finding a solution that works for everyone is a convoluted process, but cooperation between environmentalists and agriculturists will be vital, the future of Iowa and environments all around the nation depend on it.